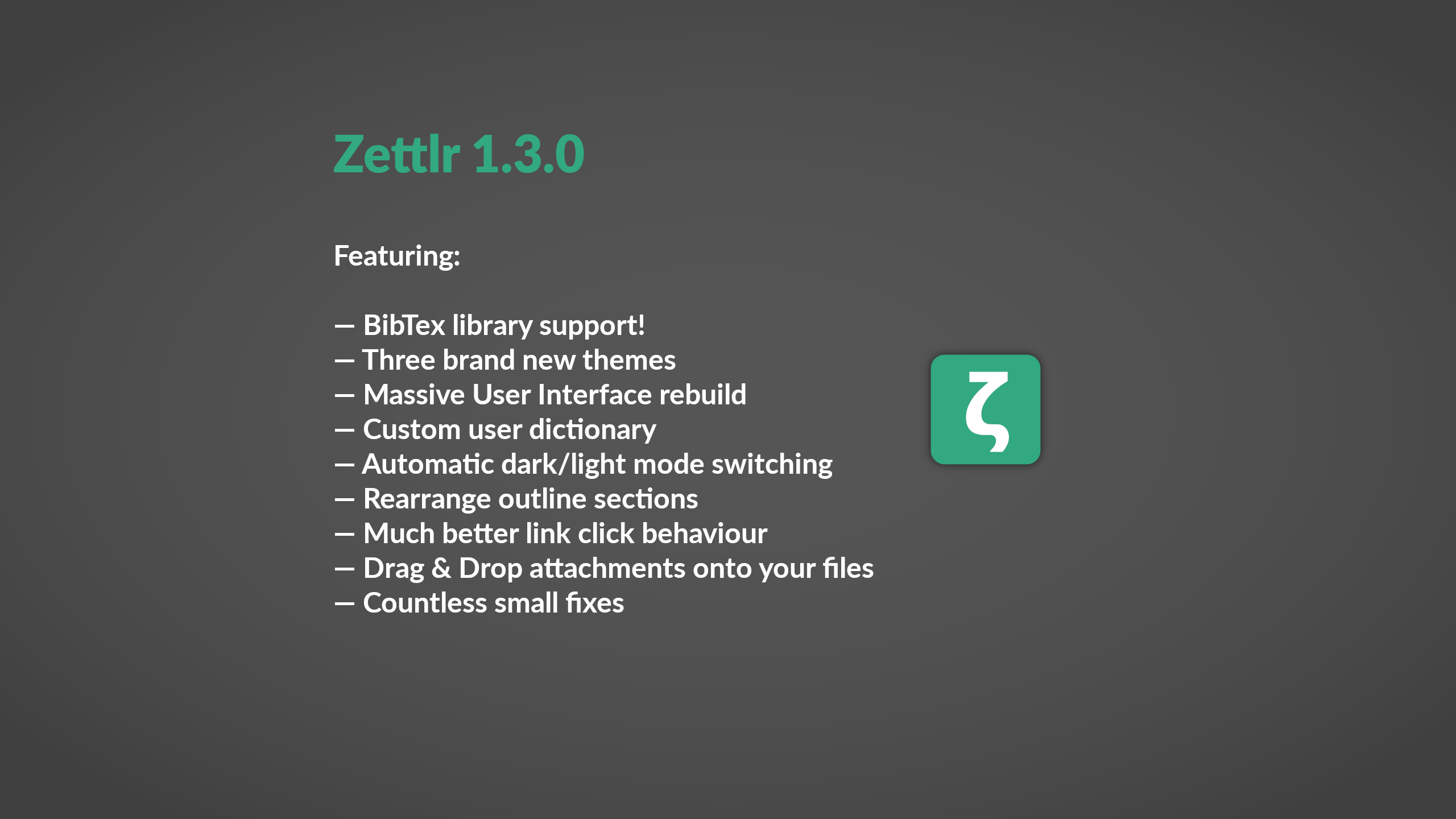 Posted in Announcements, Releases on June 07, 2019

It has been a long time since the last release, but this one is stuffed with goodies! Enjoy the most grown up writing experience ever with Zettlr 1.3! Make sure you don't miss out on our short wrap up of all the good things we've included in this one!

Posted in Announcements, Releases on June 07, 2019

It has taken two full months for us to develop and test out the next release of Zettlr, but it was totally worth it. We've been working closely with the community to make sure this update includes a whole bunch of new useful features that enrich your workflows. Apart from that, we've spent extraordinarily much time testing the functioning of the app down to the bottom to make sure to exterminate a lot of those pesky bugs that appear from time to time.

The first thing you might notice are some updates to the user interface, which we've overhauled completely. The popups are now much crisper and look more modern and you will notice that, when you search for something in your files, you can actually scroll through your files. Additionally, the repositioning of the popups is now done much smarter by the app, making it impossible for them to be hidden somewhere off the viewport.

Besides that, we have finalised the work on the new themes that we've promised on Twitter for quite some time now. You now have three different themes to choose from: Berlin, Frankfurt, and Bielefeld. Each one features a unique colour scheme and a different font for the editor.

The Berlin theme has been called like this for the past months, but only visible in the source code. This is the theme that has been developed since the early days of Zettlr. It features the known Zettlr-green and the modern sans-serif font "Lato" (Segoe Ui on Windows1). It is named after Berlin mainly because it's what we commonly associate with "modernity" in Germany. It's a somewhat empty signifier with no real genealogy whatsoever, but as many "cool" apps are commonly using city names for naming something, we thought we might stick to that. Besides, it enabled us to choose the city names for the other themes which are now shipped with the app!

Frankfurt is known to most people throughout the world by two things: For most of Europe, Frankfurt is the symbol for the European Central Bank which moved there on March 18, 2015, and which has become a symbol of austerity throughout Europe, but most extensively in Greece, which is still struggling with crippling debt. But we've chosen the name Frankfurt based on the other thing which you may know is also located in Frankfurt: The Institute for Social Research (Institut für Sozialforschung), home to the post-war intellectual Theodor W. Adorno. It has brought forth a lot of left-wing intellectuals and is home to one of the most vibrant sociological schools in Germany. The Frankfurt theme features the serif font "Crimson" and a royal blue to symbolise the spirit of the bourgeois post-war intellectualism in the German Republic, of which Adorno has become some kind of a symbol not only through his opposition of the "1968" generation.

Another fundamental sociological school in Germany has sprung up in the reformist University of Bielefeld in Northrhine-Westphalia. When German sociologist and administrative scientist Niklas Luhmann moved there in 1968 he ostensibly promised "Give me a position as professor and thirty years, and I will deliver you a complete theory of society!" He should keep his word: When he became Emeritus in 1993, he announced that his theory was done, and shortly thereafter, he passed away. What he left the world is a huge corpus of books that amount to the Systems Theory, one of the last grand theories to be developed so far. The Bielefeld theme tries to resemble the spirit of Luhmann's famous Zettelkasten; an analogous note-keeping system he kept growing for decades, even after one of his Zettelkästen burnt down. The theme features the monospaced font "Liberation Mono" which has been used for comments and HTML code in Zettlr for the past year. Additionally, it tries to imitate yellowed paper so that your personal Zettelkasten-feeling is complete!

After this introduction of our new beautiful themes, let us shortly wrap up one other thing that we introduced in this release. Zettlr now supports loading of BibTex files! So if you don't use Zotero and can't use the preferred way of loading CSL JSON files into the app, you can still make use of the app by feeding it BibTex files. So Mendeley and Citavi users, rejoice! You can finally enjoy the full experience of citing your sources with ease without having to hack around!

A lot of time and energy went into development of this release. We hope that you enjoy it just as much as the former and find that it aids you even more in writing efficiently. For the next release, a huge refactoring is planned, so it will not include as many new features as this one, but still we hope that you will excuse the slower release cycles and see them as an attribute of quality and thoughtfulness!

As always, we appreciate it, if you'd spread the word of Zettlr at your Universities and Research Institutes. In the future, we plan to move a lot more into the direction of enabling and fostering academic writing, so if you have great ideas on how to speed up academic writing, please don't hesitate to discuss everything on our brand-new forum!

In case you would like to support Zettlr, please consider either a one-time donation via PayPal, or subscribe to recurring contributions on our Patreon!

So long, and thanks for all the fish,
the Zettlr team